Romance, does it really exist anymore? Ideas of fantasy, desire and fulfilment achieved through the recognition of your immediate counterpart. This is not to say that I don't enjoy the (not so occasional) romantic film. Some of my favourites include 50 First Dates, Two Weeks Notice, Sweet Home Alabama, The Sex and the City Movie, Eternal Sunshine of the Spotless Mind and Nick and Norah's Infinite Playlist (just to name a few). But it seemed like such perfect accounts of romance and love only existed in the movies, never to be experienced out here in the real world.

So, far too often when I sit down with my girlfriends to watch a romantic movie, right about the time where Carrie and Mr. Big reunite in the closet of their "Heaven on Fifth" penthouse would I announce, this would never happen in real life! This is then met with a vehement (and often annoyed) rebuttal, "it's a movie it doesn't have to be real!" True, these are just movies, but all the same it always bothered me that such seemingly sham representations of love stories existed. Surely things like this never actually happened?

Of course, my cynical side was ultimately to be proven wrong by none other than my own mum. My mum, Maria Kovacic and her partner Glenn Gibson at the Observation Deck at the Emipre State Building

In February my mum went away on holiday with her partner Glenn, and by the time she arrived back home she had become engaged... In New York... On top of the Empire State Building... at Sunset.

View from the top of the Empire State Building

My mum had been with Glenn for about four years when they went away to America together. One of the must-see attractions on their list was to visit the Empire State Building. Once the lengthy process of taking a ferry to Ellis Island and going through the extensive security procedures had been taken care of, they made their way to the famous Empire State Building Observation Deck. Once they were at the top of the popular tourist and movie attraction, Glenn played their favourite song, "You Belong to Me" by Jo Stafford on his I-phone (a little cheesy but what romance would be complete without a little cheese?). Like something out of An Affair to Remember (without the affair) while they danced he asked her to marry him against the backdrop of one of the most iconic and romantic landmarks in the world. Their wedding is set for the end of May at the Botanic Gardens, a small ceremony with just close friends and family. So while we may not all share the movie star good looks of Carey Grant or Deborah Kerr some of us do get our happily ever after.It looks like romance isn't limited to reel life.

Have you had a real life movie moment? Is romance still alive?

I'd love to hear your thoughts and stories.

Have you entered our Win a Gown comp yet? Entries are coming in so make sure yours is on the list. 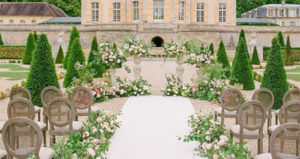